Modulation of neuroreceptors can stop the growth of lung carcinoma (cancer) cells, according to a recent study conducted by a group of researchers from the Institute of Bioorganic Chemistry of the Russian Academy of Sciences (IBCh RAS) and the Moscow Institute of Physics and Technology (MIPT).

Treatment with a water-soluble variant of Lynx1, a protein involved in the regulation of nicotinic acetylcholine receptors, stops the division of lung cancer cells in vitro and induces their death. Thus, the protein can be considered a promising prototype for the development of new drugs to treat lung carcinoma. The article was published in the journal PLOS ONE.

Nicotinic acetylcholine receptors (nAChRs) mediate signal transmission in the central and peripheral nervous systems. Epithelial and immune cells have also been found to express nAChRs. The alpha-7 nicotinic receptor (α7-nAChR), found in cancer cells, plays an important role in many essential processes, such as the development and growth of tobacco smoking-induced cancers.

α7-nAChR is the main receptor mediating the toxic effects of nicotine in cancer cells. A major bottleneck to the success of cancer therapies is the need for them to be specific. To solve this, the researchers chose the α7-nAChR as the target and used a protein capable of regulating its function.

Lynx1 is a mammalian protein, which shares structural homology with snake venom α-neurotoxins. But unlike toxins, the binding of Lynx1 to nAChR receptors modulates their activity. This, as it turns out, results in the induction of intracellular cascades controlling epithelial cell growth and proliferation. Lynx1 has been known to be present not only in neurons, but in kidney and lung tissues as well, but its role in these organs remained unstudied.

The scientists from IBCh RAS and MIPT have demonstrated that this protein is synthesized not only in healthy keratinocytes, which are cells of the outer layer of the skin, but also in lung, colon, epidermal, and other cells affected by carcinoma. Using confocal microscopy, they observed colocalization of Lynx1 with α7-nAChRs on the surface of lung and colon carcinoma cells (A549 and HT-29, respectively; see fig. 1).

Given that α7-nAChR activation by nicotine promotes tumor growth while Lynx1, which interacts with α7-nAChRs, inhibits this process, the researchers proposed to use a water-soluble variant of this protein (ws-Lynx1) to treat cancers of epithelial origin. 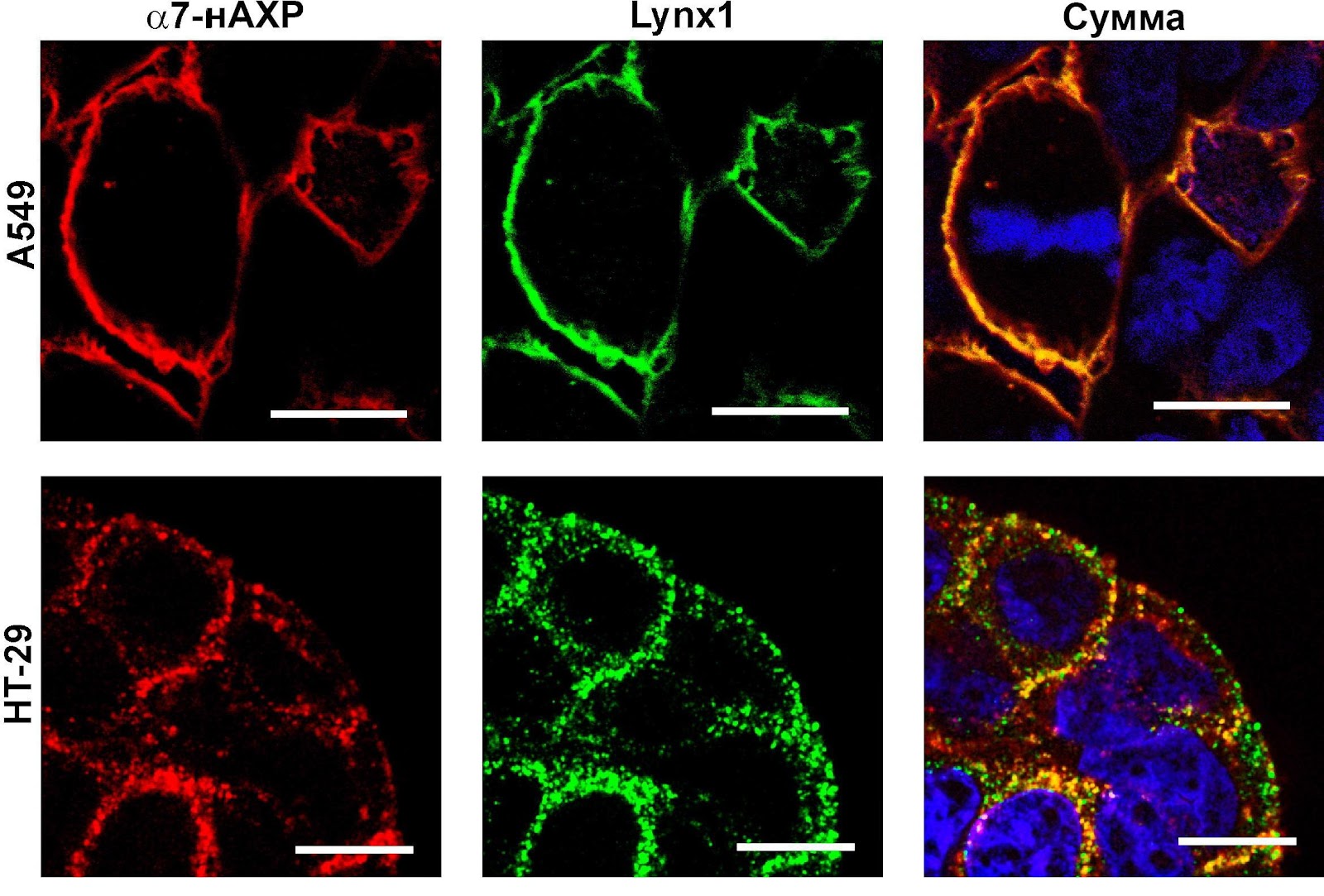 “Recently the membrane-bound protein Lynх1 was found in lung tissue. It was shown that lung cancer cells have decreased levels of Lynx1 compared with normal cells. However, enhancement of Lynx1 production using genome editing inhibited cancer cell growth. We assumed that a similar effect could be achieved using ws-Lynx1, whose concentration, and hence effects, are easier to control,” says study co-author Ekaterina Lyukmanova, head of the Group of Bioengineering of Neuromodulators and Neuroreceptors at IBCh RAS, Associate Professor of Physico-Chemical Biology and Biotechnology at MIPT.

The hypothesis was experimentally verified. Incubation of A549 cells, which are a model lung cancer cell line, with ws-Lynx1 for 72 hours significantly lowered their number. In addition, the researchers revealed that the use of ws-Lynx1 abolishes the effect of nicotine, which is known to promote tumor growth.

Mikhail Shulepko, a co-author of the study and a researcher at IBCh RAS, adds, “We have demonstrated that the water-soluble variant of Lynx1 stops the division of tumor cells and induces their apoptosis. Thus, the use of α7-nAChR modulators with properties similar to those of Lynx1 holds promise in the treatment of carcinomas.”

The study was supported by the Russian Science Foundation.
If you have noticed a mistake on this page, select it and press Ctrl + Enter