Researchers from MIPT, Skoltech, the Joint Institute for High Temperatures of the Russian Academy of Sciences, and Lomonosov Moscow State University have offered a new approach to oil composition analysis. They used high temperature and pressure to dissolve oil in water and analyze its composition. The new method is compliant with the green chemistry principle as it makes it possible to avoid using environmentally hazardous solvents. The paper was published in the Analytical and Bioanalytical Chemistry journal.

Crude oil is almost never utilized in its raw form. It is necessary, however, to know its precise composition to make refining as efficient as possible. Crude oil consists of over 100,000 compounds, with the exact composition of the sample varying based on the field it was extracted at. The extreme complexity of crude oil makes it impossible to separate into individual compounds. Heavier fractions, which are nonvolatile at 300 degrees Celsius, are yet to be properly studied. It is known that they consist chiefly of phenols, ketones, carbazoles, pyridines, quinolines, dibenzofurans, and carboxylic acids. In addition to that, crude oil from some fields may also contain sulphuric compounds. Many hydrocarbons have identical formulas, with the same number of carbon, hydrogen, and oxygen atoms, but differ in their arrangements, i.e., they are isomers.

Mass spectrometry provides information on the elemental composition of substances and their molecular mass but often fails to distinguish between different isomers. Such information may be obtained through isotope exchange analysis. This method is based on the fact that, depending on which particular compounds constitute crude oil or some other sample, oxygen and hydrogen atoms will take more or less time to be replaced with their isotopes — essentially the same elements, but with a different mass. Water is the most readily available and the cleanest source of isotopes, but oil is insoluble in water under normal conditions so potent acids and alkali have to be used instead. But acids tend to break down organic compounds, especially at high temperatures, thus altering the sample’s composition.

It is known, however, that compounds insoluble in water may be dissolved in superheated, or supercritical, water at temperatures significantly over 100 C, so it was decided to apply this method to crude oil. The researchers proved it was possible to achieve a water-based crude oil solution by increasing the temperature and pressure and analyzed its composition. The sample was heated to 360 C in heavy water (in which the hydrogen is replaced with deuterium) at a pressure above 300 atm for one hour. 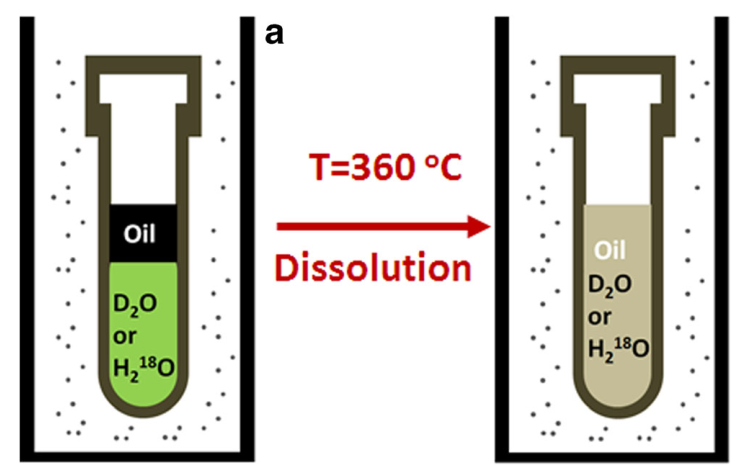 The researchers compared mass spectra of the original sample and the sample after the isotope exchange reaction. The data collected helped obtain more information on the structure of the compounds comprising crude oil. This method may be used to study other complex nonpolar compounds at the molecular level.

“Isotope labels may only be incorporated at specific positions in the molecule, similar to the lock-and-key model,” said Professor of Skoltech and MIPT Eugene Nikolaev, who also heads the Laboratory of Mass Spectrometry at Skoltech. “We can analyze molecular structure by using high-resolution mass spectrometry to measure the exchange rate even when it is impossible to separate individual compounds and identify their structure with other methods.”

“Light crude oil reserves are depleting. Hydrocracking of fuel oil, which is characterized by its highly complex and poorly studied molecular structure, is playing an ever greater role in gasoline production. Hydrocrackers are expensive, they are not produced in Russia, and they require the use of special catalysts. We have found a way to identify furans, pyridines, and naphthenic acids in crude oil without having to resort to the complex distillation process,” says Yury Kostyukevich, one of the authors of the paper and a senior researcher at Skoltech and MIPT laboratories. “We hope our research will help better understand crude oil structure and composition, contribute to the development of new catalysts for more efficient oil refining, and enable improved oil quality monitoring in trunk pipeline systems.”