Researchers from the Moscow Institute of Physics and Technology and Lebedev Physical Institute of the Russian Academy of Sciences have designed and tested a prototype cathodoluminescent lamp for general lighting. The new lamp, which relies on the phenomenon of field emission, is more reliable, durable, and luminous than its analogues available worldwide. The development was reported in the Journal of Vacuum Science & Technology B.

While LED lamps have become commonplace, they are not the only clean and power-saving alternative to incandescent lamps. Since the 1980s, engineers around the world have been looking into the so-called cathodoluminescent lamps as another option for general lighting purposes.

Shown in figure 1, a lamp of this kind relies on the same principle that powered the old TVs using cathode-ray tubes: A negatively charged electrode, or cathode, at one end of a vacuum tube serves as an electron gun. A potential difference of up to 10 kilovolts accelerates the emitted electrons toward a flat positively charged phosphor-coated electrode — the anode — at the opposite end of the tube. This electron bombardment results in light. 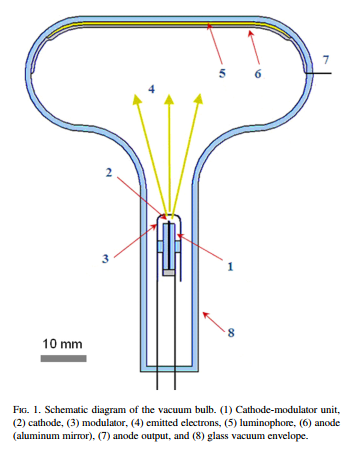 Cathodoluminescent lamps have the advantage of being able to emit light almost at any wavelength, from the red to ultraviolet, depending on which fluorescent material is used.

Novel ultraviolet light bulbs would be a particularly timely development, considering the recent ban on household appliances using mercury under the Minamata Convention, a United Nations treaty signed by 128 countries that came into effect in August 2017. Among other products, the ban targets ultraviolet fluorescent tubes, widely used for greenhouse lighting and other applications. Cathodoluminescent UV light bulbs contain no mercury and are generally cleaner in service and upon disposal.

“Some industries using mercury lamps for water treatment and air disinfection, for example, will be very slow and unwilling to phase them out,” commented Mikhail Danilkin of Lebedev Physical Institute, RAS. “But medicine is different, because the issue of mercury lamp disposal at individual medical facilities has not been resolved, while the environmental standards are becoming stricter. Cathodoluminescent lamps could be used in operating room decontamination, UV irradiation of throat and tonsils, and dental filling curing.”

Another important advantage of the new lamp over LEDs and fluorescent bulbs is that it does not rely on the so-called critical raw materials. These include gallium, indium, and some rare-earth elements. While their supply is limited, these materials are essential and irreplaceable in the health, defense, aerospace, and other key industries. The European Commission lists them as strategically important for the European economy.

Attempts to mass-produce commercial cathodoluminescent light bulbs have been made in the United States, but the consumers did not embrace the device, mostly because it was bulky and took several seconds to warm up the cathode to operating temperature. Similarly, the old TV sets began displaying the image after a brief delay.

Some cathodes require no warmup, though. They are known as field emission cathodes, because they rely on the phenomenon of field emission. It involves a cold cathode emitting electrons under an electrostatic field alone, due to tunneling.

However, designing an efficient, long-lasting, and technologically advanced cathode that could be mass-produced and sold at an affordable price has proved challenging. Despite an ongoing effort in Japan and the U.S., the recent Russian study marks the first successful attempt at this.

“Our field emission cathode is made of ordinary carbon,” said Professor Evgenii Sheshin, deputy chair of vacuum electronics at MIPT, who led the research team. “But this carbon is not used merely as a chemical, but rather as a structure. We found a way to fashion a structure from carbon fibers that is resistant to ion bombardment, outputs a high emission current, is technological and affordable in production. This technology is our know-how, no one else in the world has it.”

By subjecting the carbon to special treatment, many submicrometer protrusions — less than a millionth of a meter in size — are formed at the tip of the cathode (figure 2). This results in an ultrahigh electric field at the tip, driving electrons out, into the vacuum. 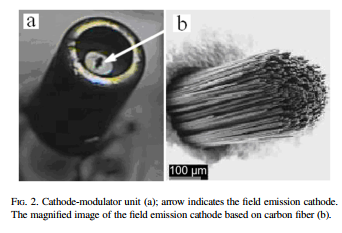 Figure 2. Cathode modulator unit (a) with an emitting carbon fiber cathode indicated by the white arrow, and a magnified depiction of the cathode (b) at 100-micrometer scale. Image courtesy of the researchers

The MIPT research group has also developed a compact power source for their cathodoluminescent lamp, which supplies enough kilovolts for successful field electron emission. The source is fitted around the glass light bulb (figure 3) with almost no effect on its size. 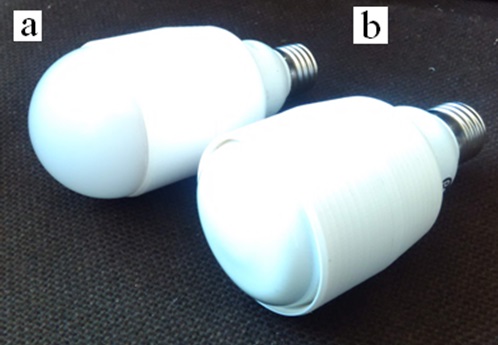 Figure 3. Laboratory prototypes of cathodoluminescent bulbs with a built-in voltage converter for an E27 cap with a diffuser (a) and without it (b). The luminous power is up to 250 lumens, which is about the output of a 25-watt incandescent lamp, but the power consumption is only 5.5 watts. Image courtesy of the researchers

The paper reports prototype tests and the lamp’s technical characteristics. These data suggest that if mass-produced, the new cathodoluminescent bulb could compete with the cheap lamps based on light-emitting diodes. The new bulb would also help phase out the hazardous fluorescent lamps containing mercury, which are still used in many households.

“Unlike the LED bulb, our lamp is not afraid of elevated temperatures. You can use it where diodes quickly fade, such as in ceiling spotlights, where insufficient cooling is provided,” added study co-author Dmitry Ozol from MIPT’s vacuum electronics department.

Figure 4. Possible megatrends in lighting applications. While light-emitting diodes rely on fewer critical raw materials than the currently used fluorescent bulbs, organic LEDs are expected to eliminate the need for these materials altogether, with the exception of indium. Credit: @Linasmlth.art/MIPT Press Office


If you have noticed a mistake on this page, select it and press Ctrl + Enter